The Sound & Music of The Taming of the Shrew

Inspired by our beloved 2007 production, The Taming of the Shrew returns to the BMO Mainstage, directed by Lois Anderson, and riding tall with pistols blaring as one of Bard’s most popular productions.

The story told in this season’s production is Katherine Minola’s. A woman who rails against the status quo. In 1870’s Padua City, her options are few: integrate or be pushed out of town. But with a few tricks up her sleeves, Kate is determined to shake things up in Padua City. 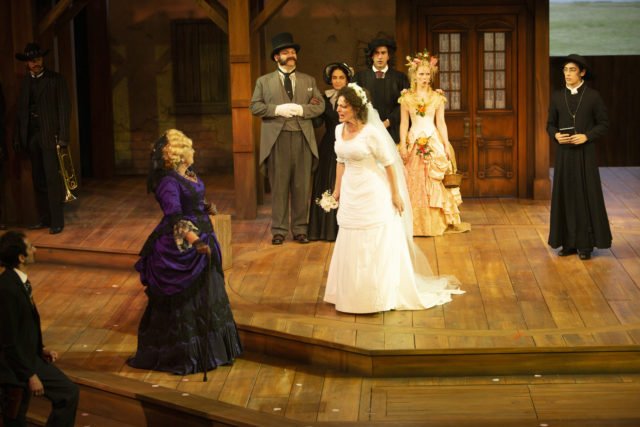 The Company of The Taming of the Shrew | Photo: Tim Matheson

Sound and music enhance the telling of this ‘spaghetti-western’ tale. Sound Designer Malcolm Dow had the unique task of creating his own sound out of existing compositions written by the late composer Marc Desormeaux.

“I’m not necessarily using the same music for the same cues… Now the town will feel formal and structured, something to rebel against,” Dow explains.

“It’s almost like a dialogue between my take and his (Desormeaux). My job is to do justice to what he’s created – and re-imagine it for this production,” notes Dow.

Sometimes the essence of good sound design is that you might not even be aware of it! As Dow explains, “it’s sort of like adding the final brush strokes or filling in the colour. A light breeze as Petruchio first arrives in town with Grumio, the barking of dogs in the distance as they exit, chiming of bells in the distance as we wait suspended for Petruchio to show up at his wedding…”

“…If you add all those layers then the audience doesn’t have to imagine them, it helps them experience the world we’re creating for them.”

Join us this summer at The Taming of the Shrew to experience Bard’s take on the Wild West!