The Costumes of Shakespeare in Love 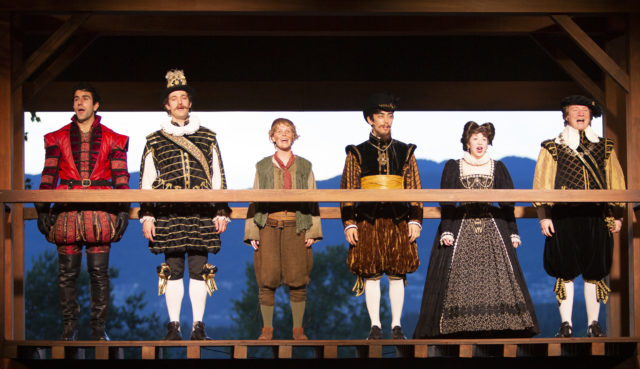 This is Bard on the Beach’s first production of the stage adaptation of the Oscar-winning movie, Shakespeare in Love. It features some of the most intricately beautiful Elizabethan-era costumes to grace Bard’s stage, so we’re taking you behind-the-scenes with production photographs, as well as revealing the vision behind the designs.

The love and care that went into these garments is unmistakable. The intricate stitching and beading on the dresses, the period-accurate men’s breeches, and the striking colour compositions are all outstanding. – Katherine Dornian, The Georgia Straight

In Elizabethan England, colour was often used to identify social standing. In Shakespeare in Love, colour also reveals character. As Costume Designer Cory Sincennes explains, “Colour can be used to show the emotional journey of a character, as well as their status within their world.”

In the scenes where Viola de Lesseps (played by Ghazal Azarbad) is with her parents and inside their aristocratic world, Sincennes has dressed her in shimmering, metallic golden tones. This indicates her high status, but also hints at the fact that as a woman, she is treated more like a trophy than a person by the men of her own rank.

When Viola disguises herself as the actor Thomas Kent, the colours she wears shift to more earthy tones, such as burgundies and deep oranges, reflecting that even though she is wearing a disguise, she can be more truly herself in those moments.

Some the productions’ costumes were created for the original staging of the production at the Citadel Theatre in Edmonton. Others were built by Bard’s Wardrobe department, based at our BMO Theatre Centre headquarters in Olympic Village; for example, the Queen’s elaborate gowns were entirely crafted in Bard’s costume shop. The results are a showcase of the skill and artistry of Bard’s Wardrobe team, led by Head of Wardrobe Amy McDougall.

Directed by Citadel Theatre Artistic Director Daryl Cloran, returning to Bard after directing our 2018 Season’s record-breaking Beatles-music-filled As You Like It.

This production was originally conceived at the Citadel Theatre, Edmonton. It is written in contemporary English, with occasional text excerpts from Romeo and Juliet and The Two Gentlemen of Verona.