Bark on the Beach: behind-the-scenes with Shakespeare in Love’s Kingsley and PorkChop

This year’s production of Shakespeare in Love features two adorable and talented dogs, Kingsley and PorkChop. We wanted to know what our canine stars are like off the clock, so we chatted with owners, Carrie Wong (PorkChop) and Jennifer McLean (Kingsley) to find out more!

Bard: Tell us what your dog is like at home.

Carrie Wong: PorkChop is actually really chill at home. He loves looking out the window for hours for raccoons, cats and squirrels in the neighbourhood.

Jennifer McLean: At home Kingsley is very chill. He loves to curl up beside the couch and sleep. He loves to go out on the deck and try to catch flies…

Bard: What does your dog like to do for fun?

Carrie: Porky loves chasing waves at the beach and is actually a pretty good swimmer for a terrier. He loves rolling around in anything smelly and dirty. He goes nuts playing with his best friend Dobby, and especially enjoys his time at his grandparents because we suspect that he gets table scraps while visiting them!

Jennifer: Kingsley loves hiking, chewing on sticks, bossing his little brother around and stealing attention and treats from anyone who will give him the time of day!

Bard: Tell us how your dog got into acting, and about some of their previous jobs.

Carrie: He got into acting because he’s just a dog that loves to do tricks!  He’s super agile and apparently, from what I’ve seen so far, he loves the spotlight!  His permanent job however is “Shop Dog” at Ball and Biscuit Grooming. His duties include barking at the postman to let me know my mail has arrived and trying to get as many pets as he can from customers. Hopefully we can land some more acting gigs after this role in Bard!

Jennifer: Kingsley got into acting entirely by accident! His first job was an RBC commercial where he played a pretty little lady! A friend of mine was the animal trainer for the job and told me to submit him – they loved his look! Bard happened pretty much the same way, someone I knew was involved with the production, and I submitted Kingsley for the job. 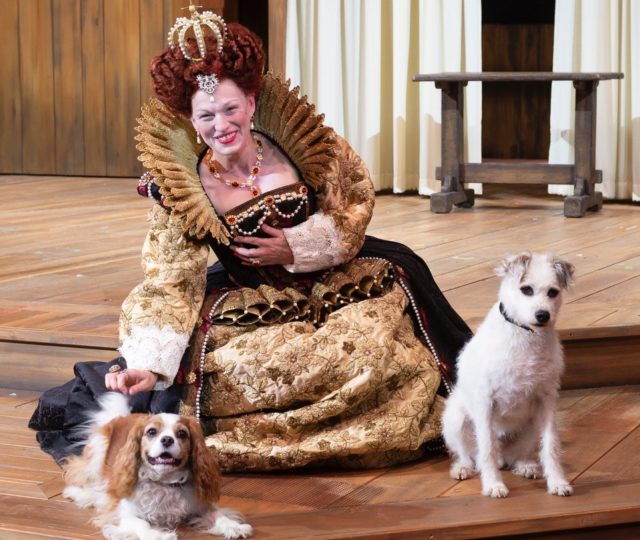 Bard: What is your favourite memory of your dog working at Bard so far?

Carrie: It would have to be how he interacts with the two actors that he works with the most, Andrew Cownden and Anton Lipovetsky. He gets super excited when he arrives at the gate at Bard and when he sees Andrew or Anton, he tries to do his tricks by jumping on them even though he’s not on stage!  Andrew and Anton are just so nice and patient with him, letting him jump on them over and over again. I can just see that Porkchop really enjoys working with them and with the rest of the cast and crew at Bard!

Jennifer: I have so many favourite moments with Bard, as it has been such a fun and rewarding experience, but my favourite moment was probably a few weeks ago after Kingsley performed one of the tricks, he looked at the audience as if to say did you see that?? Then ran off! He just loves the attention, and he is so confident. He really is in his element.

You can check out Kingsley and PorkChop on the BMO Mainstage in Shakespeare in Love until September 18! This interview has been edited for length and clarity.