Explore the areas filmed in Bard Around Town Episode Five. On this route you will explore the forgotten and torn-down theatres and neighbourhoods of old Vancouver, with your friendly guide Max Forsyth.

Share photos of your tour with us on social by tagging @bardonthebeach or using #bard2020. We hope you enjoy exploring these locations!

Start your journey at Victory Square, the spot where Max talked about the early Opera houses of Vancouver, cultural fixtures during the Empire years of the early 1900s. 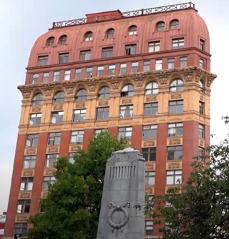 Now start your jaunt through old Vancouver – and head east along Pender Street, until you arrive at the Sun Tower. It may still be under tarps going through renovation, but the Sun Tower is one of the finest buildings in Vancouver. Completed in 1912, the Sun Tower took the crown from the Dominion as the Empire’s tallest building at that time. Notice the nine Maiden statues along the 8th floor. These nude maidens were controversial for their time, scandalizing ‘proper’ Vancouverites.

Look across Pender street at the Duncan Building. This is where the Imperial Opera House once stood as shown in the episode. It was the second Opera house to be built in Vancouver in 1889. The first Shakespeare production in Vancouver, Richard III, was performed here in December 1889. The Imperial had to compete with two other opera houses in town, causing financial difficulties. So to pay its bills, it doubled as roller rink. Five years after its completion as a theatre, it was turned into a Drill Hall. The building was torn down in 1911 and replaced by the current Duncan Building. 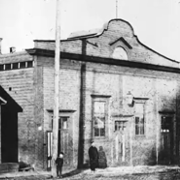 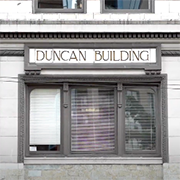 Right before you pass under the Chinatown Gate, look to the north side of Pender for the unique Skwachàys Lodge. This landmark at 31 West Pender is Vancouver’s first Aboriginal arts hotel. The building houses a fair-trade Indigenous art gallery, boutique hotel and an urban Indigenous artist residence. Look up to see the longhouse patio!

Continue your journey, and now you can pass under the Chinatown Millennium Gate. Welcome to Chinatown!

Take a right at Shanghai Alley. 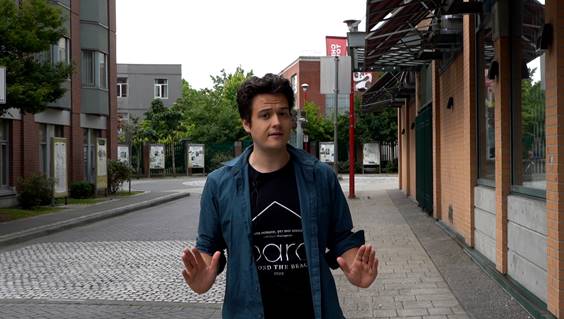 The Shanghai and Canton Alley complex was once the centre of Chinese Canadians’ community and cultural life. The origins of the area precede the foundation of Vancouver. By 1890 there were more than 1,000 people living here. And in 1898, the 500-seat Sing Kew Theatre was completed, housing Chinese and Cantonese Operatic productions. In the first decade of the 20th century, the alley was the centre of Chinatown’s nightlife. Imagine what it must have been like, with packed buildings full of music and laughter, and the sounds of the nearby train yards. In 1907 the Asiatic Exclusion League of Vancouver caused an anti-Asian riot, destroying many of the store fronts in the area. Fortunately there were no physical casualties, but many properties were damaged, creating a shameful stain on the young city. 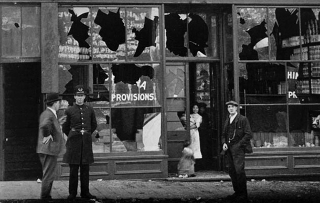 However Chinatown still thrived, despite this and the Chinese Immigration Act of 1923 which made it almost impossible for ethnic Chinese immigrants to come to Vancouver (a restriction not fully lifted until the 1960s). In the 1920s and 1930s, Chinatown’s commercial centre expanded eastward towards Main Street, and the Alley complex soon fell into decline. To learn more about the area’s history, read the history boards around the West Han Dynasty Bell in the middle of the alley.

Now let’s continue the journey towards Main Street. You have three options here! You can continue along Pender Street, or take Keefer Street to Main Street. OR you can walk south on Columbia/Quebec Street. Whichever route you choose, your destination will be the corner of Main and Union. Enjoy the sights and sounds of Chinatown as you stroll along. And if Dr. Sun Yat-Sen Garden is open, you can take a shortcut through its peaceful and picturesque grounds.

Look out for the Sam Kee Building – on the corner of Pender and Carrall. It‘s the narrowest commercial building in the world! If you’re strolling along Pender Street, grab a delicious steamed bun at New Town Bakery or sample some food from one of the many other great restaurants. Or just keep walking towards Main Street. 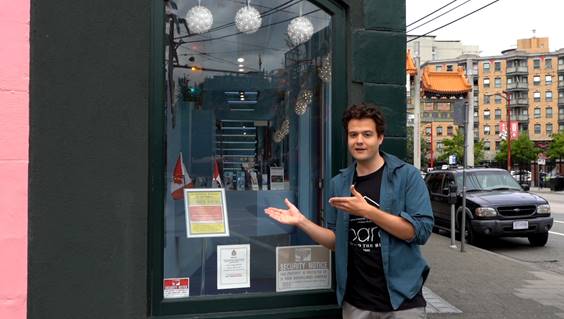 Max in front of the Sam Kee Building

Now turn right and head south on Main Street towards Union. On the corner before the Georgia Viaduct you will find the sub station which used to be the Avenue Theatre.

Completed in 1912, the Avenue Theatre served as the city’s main hub for Shakespeare in the inter-war years. Beyond the Bard, many new local plays were produced here as well. It was also a popular place for protests and causes. The historic ‘On to Ottawa Trek’ protestors met here, before their trek eastwards to protest conditions in the work camps during the Great Depression. Shortly after this the theatre and the building were replaced by the Art Deco sub station.

Before and After – The Avenue Theatre

Now let’s keep moving, and walk south on Main Street. When you get to Union Street, turn right and walk down the road until you see the fantastic new mural on the side of the viaduct.

Artist Anthony Joseph has painted this mural on the viaduct to highlight the demolished neighbourhood of Hogan’s Alley. He has truly captured the people and the spirit of this forgotten area of Vancouver.

As you start walking east along Union Street towards Strathcona, you are now walking in what was once Hogan’s Alley.

From the corner of Main Street to the alley on Union Street was where Vie’s Chicken and Steak Restaurant once stood. A hotspot for many travelling entertainers coming through Vancouver, including Ella Fitzgerald, Duke Ellington, and Sammy Davis Jr. It was the place to be in Vancouver’s night life scene in the 1940s and 1950s. It’s signature appeal came from being open late and serving amazing food! 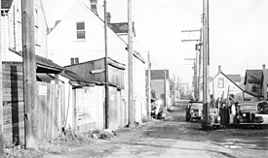 The neighbourhood that stood here was one of the most interesting and vibrant places in Vancouver. But it was torn down to make way for the Georgia Viaduct. The rest of Chinatown and Strathcona were also slated to be demolished – but the citizens of Vancouver rose up and stopped the freeway project with their protests and activism. 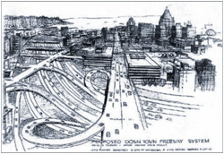 You can continue your walk into Strathcona and admire the beautiful homes and community we almost lost to the freeways. Or stop and sample some of the great restaurants along Union Street.

We hope you had an unforgettable walk!

Before and After of the Avenue Theatre: https://changingvancouver.wordpress.com/2012/02/09/avenue-theatre-719-main-street/