Five Questions with a Fight Director

Our 2018 BMO Mainstage productions, As You Like It and Macbeth, are filled with an array of choreographed pieces — from dance sequences, to wrestling moves and sword fighting. And they’re all performed by the same cast members!

It takes actors with great discipline and versatility to be able to master multiple moves, and an even more talented Fight Director to design and teach these techniques for the stage. Jonathan Hawley Purvis, Fight Director and Choreographer for both shows, does just that. And now he takes you behind the scenes…

Q 1. You designed the choreography for AS YOU LIKE IT, and the fight sequences for MACBETH. Which is closer to the work you usually do?

A. The combination of the two shows this season provided a delightful challenge for me as a choreographer. The sword fights in MACBETH certainly feels like it was closer to my comfort zone. As far as choreography is concerned, I’ve certainly done more sword work than anything else. In AS YOU LIKE IT, building the “Pro Wrestling” scenes was a first for me. It required a combination of researching actual techniques and adapting standard stage combat to create the illusion of those wrestling moves. Although Pro Wrestling of that nature has always been “staged”, those practitioners are outstanding athletes who push their bodies to the limit. The actors and I were tasked to try and emulate that style while keeping everyone considerably more safe. It was a blast! 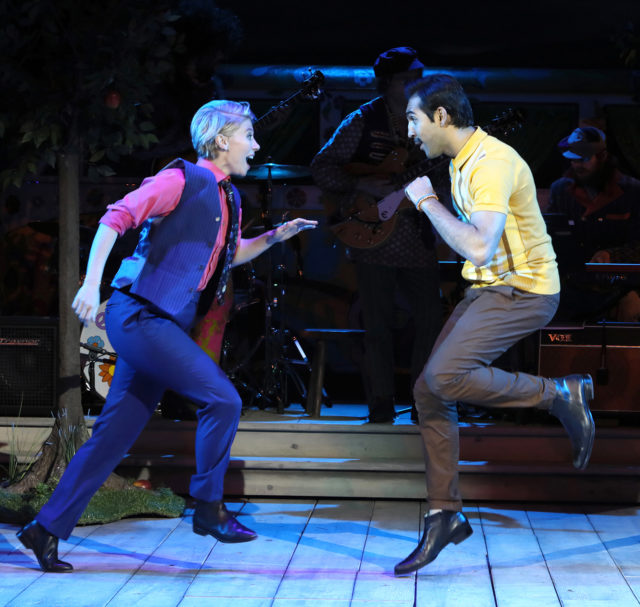 Lindsey Angell & Nadeem Phillip, As You Like It | Photo: Tim Matheson

Q 2. (For AS YOU LIKE IT) How were you influenced by the culture of the ‘60s, as you decided how the actors should move?

A. The 60’s was all about the movement towards love, tolerance, and individuality. Dance of that era really reflects that. I wanted that feeling to come out in the choreography. It was also very important that both the singing and dancing drive the story forward. I tried to make the moves reflect that. The director, Daryl Cloran, and I also wanted to highlight the difference between the characters from the “court” and those out in the country. Orlando and Rosalind dancing with very popular moves from the era, while Silvius does a lot of line dancing and country style moves.

Q 3. What classic ‘60s wrestling moves have you included – and do you have a favourite?

A. Wrestling in the 60’s often used a lot of “submissions” and “hip throws”. I tried to include as much of that as possible. I also snuck in some more modern moves for their theatrical effect. My favourite is Orlando’s finishing move against Charles. The move is called a “Tilt-a-whirl”, made famous by the wrestler Rey Mysterio. It’s a spectacular looking move and fairly easy to execute with two athlete performers. 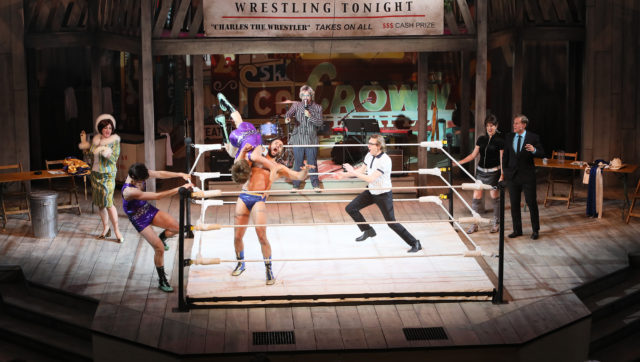 The Company of As You Like It | Photo: Tim Matheson

Q. 4. (For MACBETH) How do you work with an actor who hasn’t done much sword-fighting, and needs to get good in a short period. Do you have special tips and tricks?

A. This is a really great question, and it’s a situation the comes up often in this business. The simple answer is: we work slow. It takes time, but we have to build a fight very slowly the ensure that the timing and precision of each move is understood and executed. This is doubling true for anything where weapons are involved, such as MACBETH. Though the blades are dulled, they could still inflict damage. Over time we increase our speed as our confidence with the routine improves. All this while, it’s important to be layering on character motivation. I often say “The characters are trying to kill each other, but the actors are dancing together.” It requires a lot of discipline to keep both of those intentions running at the same time. I also cater my choreography directly to the actors performing it as often as I can. I spend a lot of my time watching how an actor moves, how their own physical nature can come to life. I find this helps actors feel more confident. Which in turn, makes for a better fight. 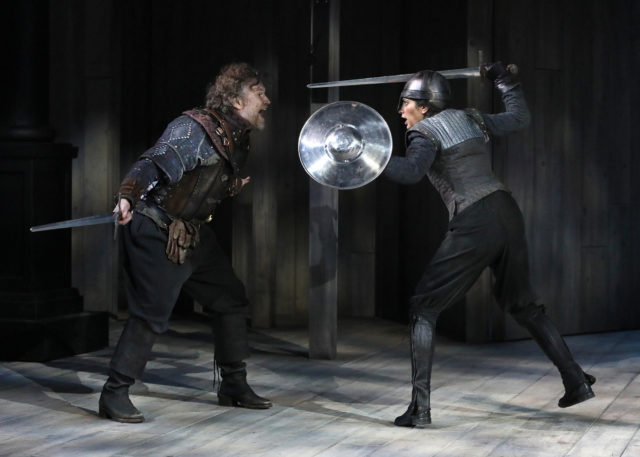 Q. 5. Is there some particular thing, in either production, that you’d like audiences to watch for and appreciate?

A. Honestly, just watch the outstanding talent and versatility of those actors on stage. That same group of performers go from trying to hack each other to bits with broadswords, to throwing themselves around in a wrestling ring, to playing multiple instruments, to dancing and singing to Beatles songs. All the while, speaking Shakespeare’s remarkable words as honest and very human characters. It’s simply outstanding!

Stay tuned for more blog posts from Members of the Bard Artistic team!