Every play at our Festival comes with its own onstage world, dreamed up and made real by Bard’s gifted designers and their teams. They amaze us every season with their innovative sets, eye-catching costumes, evocative lighting and sound designs – and production props.

Props, or ‘properties’, are hugely valuable when bringing a story to life on a stage – and this season you’ll see lots of very cool examples. Look for a period-perfect 1950’s movie camera and tripod in our cinema-inspired Much Ado About Nothing, and two life-sized sheep puppets and a glorious cloud of leaves covering the massive tree in The Winter’s Tale. 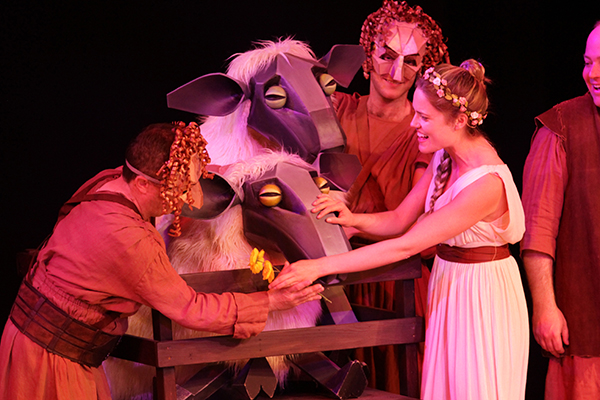 Heidi Wilkinson, Bard’s Head of Properties and resident Puppet Designer, is at the heart of all this creativity and craftsmanship. For the past twenty years, our “Chief Prop-tologist” and her team have sourced and constructed thousands of objects to surprise and entertain our audiences. Their home base is a warren of corridors, cul-de-sacs and workrooms at a production centre in East Vancouver. Past ‘typical days’ have included meticulously crafting reproductions of antiquities for 2016’s Pericles and constructing a large swan “tunnel of love” boat for a Twelfth Night production a few seasons back. Right now the pace is fast and furious as the entire team races to keep up with four productions, each one with extensive props needs. 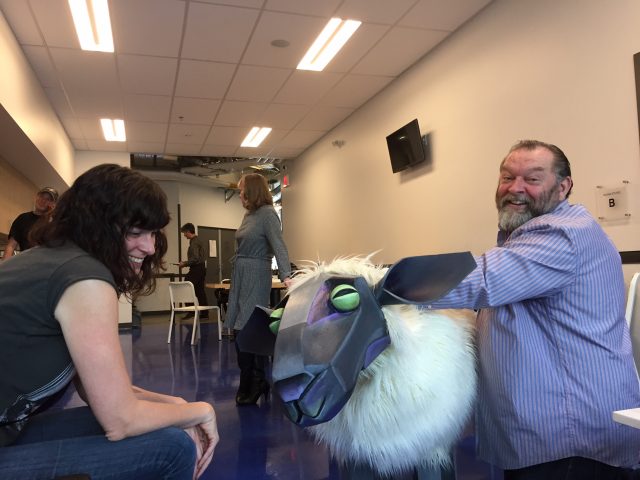 Not the least of which, the two sheep puppets. Notes Heidi: “We wanted to create a recognizable animal – but also one that fit within the geometric-focused concept of this year’s Winter’s Tale. Frances Henry, who co-designed the puppets with me, made a small rendering of a sheep face with clay and we modified it by creating and playing with the facets that you also see in this play’s bear and its masks. We had fun sorting out how to make the sheep’s heads and legs moveable and fun…and the little wagging tails are my favourite touch.”

The team’s most ambitious creation this year is without doubt the creature from the famous Winter’s Tale stage direction, “Exit, pursued by a bear”. They’ve crafted a large-as-life, one-of-a-kind animal that will lumber onstage for months to come, to the delight (and fright?) of audiences.

But now, back to the sheep. They’re two adorable, fuzzy peas in a pod – one boy and one girl – and they don’t have names. So we’re launching a contest to name the two sheep in The Winter’s Tale – and if the names you submit are chosen, your prize is four tickets to see the play! We know there’s a winning idea out there – so enter today. Deadline for entries is June 29.