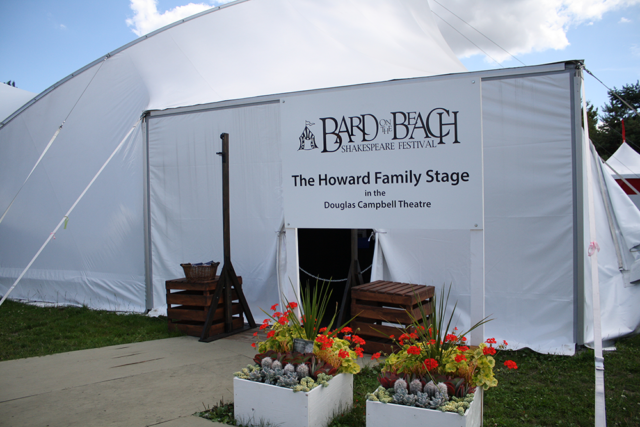 The Howard family has a long history of supporting theatre and the performing arts in Vancouver. Darlene Howard is a past board member of the Vancouver Playhouse Theatre Company, and an active member of Bard on the Beach’s Board of Directors. Since the naming of the stage in the Douglas Campbell Theatre in 2014, over 60,000 patrons, artists and young people have visited, performed, created and played on the Howard Family Stage. The size and flexibility of the Howard Family Stage lends itself to work that is innovative and experimental, and has also been an invaluable resource for our education and outreach activities.

“I am a passionate supporter of Bard” writes Darlene Howard, “Why? Because of the excellence it strives for and achieves; because of its broad view of its role within the arts and in the community; and because of the care and responsibility it shows to well-established artists, emerging artists, education, new works.. . . . We are very happy to support Bard in every way we can!”

“Darlene and Paul Howard are extremely generous and we are truly honoured that they have made such a commitment to the future of Bard on the Beach”, says Christopher Gaze, Bard’s Artistic Director. “We cannot say enough about how their philanthropic leadership has transformed our company and helped us realize a bright future ahead. From the bottom of our hearts – thank you. Here’s to many more wonderful performances and activities on the Howard Family Stage!”

In 2017, we look forward to welcoming three productions to the Howard Family Stage in the Douglas Campbell Theatre. Award-winning Canadian actor-director Nigel Shawn Williams will direct a provocative new staging of The Merchant of Venice, set in contemporary Italy. It will alternate with Shakespeare’s romantic comedy The Two Gentlemen of Verona, directed by Bard Artistic Associate Scott Bellis (The Comedy of Errors, 2015). For the first time ever, Bard will offer a fifth play in its summer season, a short run production on the Howard Family Stage. Shylock, directed by Sherry J. Yoon, and written by BC’s Mark Leiren-Young was first produced at Bard in 1996. As a companion to The Merchant of Venice, it imagines a modern-day actor playing the character Shylock, who wrestles with the timely issues of censorship and political correctness.