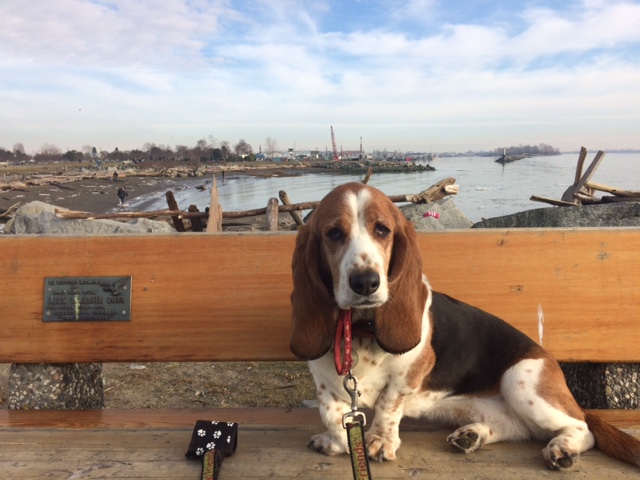 APRIL 24, 2017, VANCOUVER, B.C. – It’s now official: the 28th season of the Bard on the Beach Shakespeare Festival will feature a four-legged performer who will put the Bark back in Bard. The Festival announced today that after a rigorous round of auditions, a local Basset Hound named Gertie has been cast in its production of the Romantic-era comedy, The Two Gentlemen of Verona. It’s the first time a dog has appeared on the Bard stages since 2001.

12 finalists were auditioned last month at Bard’s BMO Theatre Centre head offices and the low-slung hound was a standout, even without any past theatrical experience.

Says Scott Bellis, the play’s director, “Gertie impressed the entire judging panel; she has that magic combination of good looks, smarts and an unflappable personality. I’m looking forward to putting her through her paces and introducing her to Bard audiences this summer. I predict she’ll be a breakout star!”

Gertie will perform the role of Crab, a dog whose servant owner is a comic character in Shakespeare’s early romantic comedy. Here is her official Biography:
Gertie, age 6, is brand new to the stage and is hoping to make her mark on the acting world with this paw-portunity. Gertie ain’t nothin’ but a hound dog, and as such, loves to smell everything. She is also not a discerning eater and has consumed over 12 socks in her lifetime. Her other activities include hiking, snowshoeing, sticking her head through strangers’ legs and regurgitating things she should not have eaten.
Gertie’s audition video is available at https://www.youtube.com/watch?v=yBvTDjgiM_M.

Where: Bard on the Beach – BMO Theatre Centre, 162 West 1st Avenue, Vancouver (1st Avenue entrance).
There is paid parking available at West 1st and Columbia (entry to lot is on 1st, between Cook and Columbia travelling east). Also on-street meter parking all around the Centre.

ABOUT THE TWO GENTLEMEN OF VERONA
Directed by Scott Bellis • June 29 to September 17 • Howard Family Stage in the Douglas Campbell Theatre
Valentine and Proteus are best friends with an awkward problem – they’re both in love with Valentine’s girlfriend Sylvia. And it gets even trickier – Proteus already has a girlfriend of his own! Shakespeare’s early romantic comedy is a lively riff on friendship, love and loyalty with the bonus of two very funny clowns, plus a dog named Crab who may just steal the show!

The Production Sponsor of The Two Gentlemen of Verona is BlueShore Financial.

ABOUT BARD ON THE BEACH SHAKESPEARE FESTIVAL • June 1 – September 23, 2017
Bard on the Beach is Western Canada’s largest professional Shakespeare company and its Artistic Director is Christopher Gaze. The annual summer Festival is presented in Kitsilano’s Vanier Park, adjacent to Vancouver’s downtown core, with all performances in open-ended tents on the waterfront against a stunning backdrop of mountains, sea and sky. Follow Bard on the Beach on Facebook and Twitter. The 2017 performance schedule and tickets are at bardonthebeach.org