Behind the Scenes: Shooting our Much Ado About Nothing Image

Every season, one of the first big projects for our Marketing Department is creating advance artwork for each of our plays. For the past six years, Bard’s Associate Artistic Director Dean Paul Gibson has served as creative director for our photo shoots. Dean meets with each of our directors to learn about their vision; then he develops the image concepts, consulting with our photographers, David Cooper and Emily Cooper and Bard’s Marketing Director, Heather Kennedy.

Our most ambitious photo shoot of the 2017 season was definitely for Much Ado About Nothing. Director John Murphy’s production inspiration was the classic Fellini film, La Dolce Vita, so we wanted our advance image to evoke the romantic and sexy style of 1950s Italian cinema, while also telling a story about the play’s romantic leads, Beatrice and Benedick.

With La Dolce Vita in mind, we knew the ultimate accessory for our actors would be a classic Triumph TR3 convertible. We found the perfect car in Burnaby, but faced an unexpected challenge – how to get a valuable collector car downtown without driving it on the salt-coated roads of a snowy Vancouver winter.

Jordie’s Auto Rescue saved the day, and with a film crew from Great Pacific Media documenting the action, the car was loaded onto a flat-bed tow truck and transported to David Cooper’s studio. Then it was carefully lifted up and inside through the loading dock door. 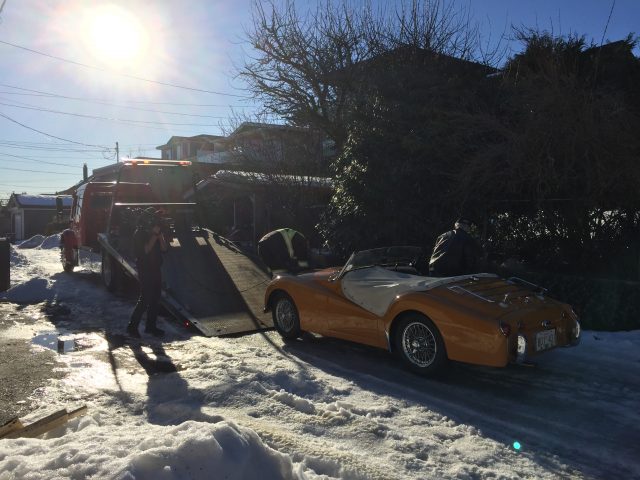 Picking up the car in Burnaby 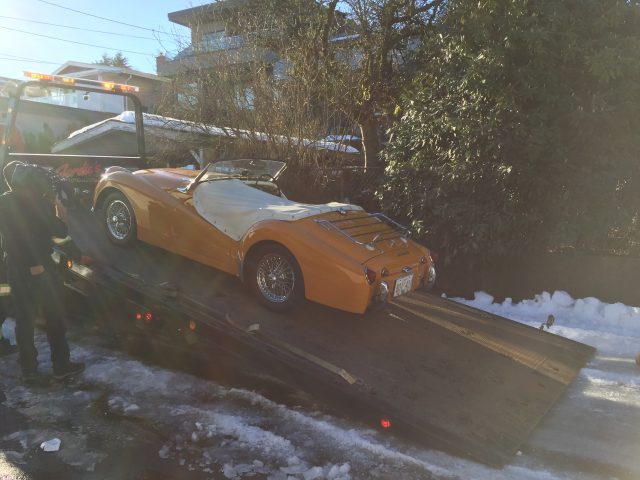 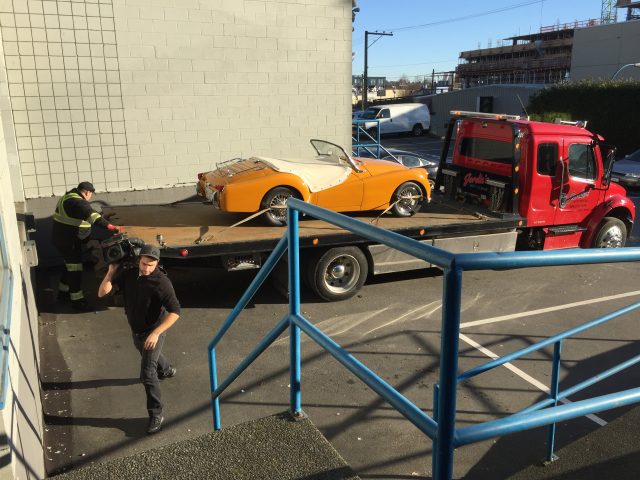 David and Emily adjusted lighting around the car, and set up another backdrop for portraits, working with assistant Riun Garner. 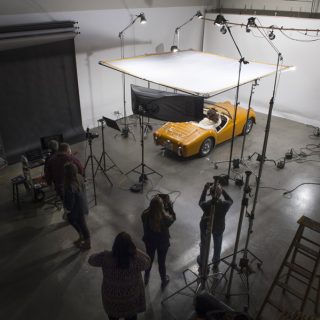 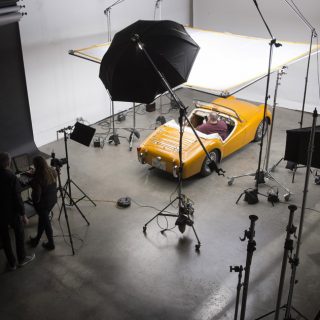 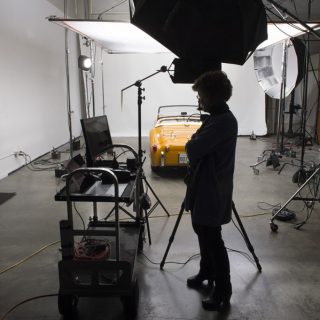 I headed the other way to pick up our Beatrice, Amber Lewis. Our first stop was Zinc Inc. salon, where Noelle turned Amber’s full, curly hair into smooth, sultry waves – not a simple process! 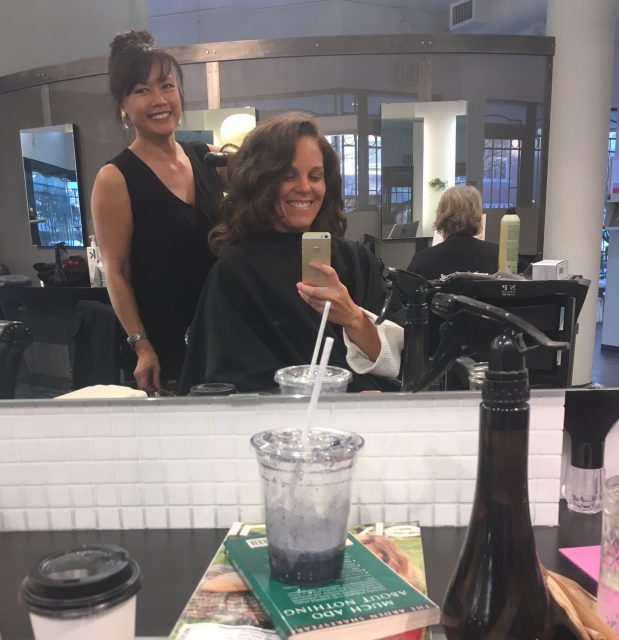 Amber and Noelle at Zinc Inc.

Then it was on to David Cooper’s studio for makeup and costumes. I did a dramatic cat eye on Amber, with full brows and a light lip. Our Benedick, Kevin MacDonald, was given a slicked down ‘do reminiscent of Marcello Mastroianni. 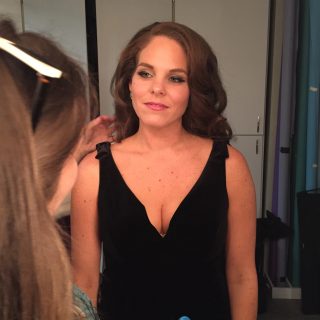 Channeling the 1950s with a bold cat eye 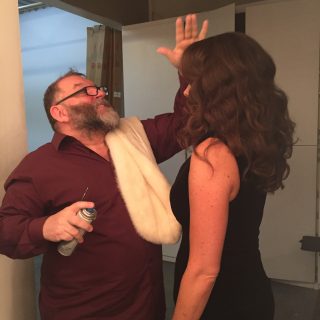 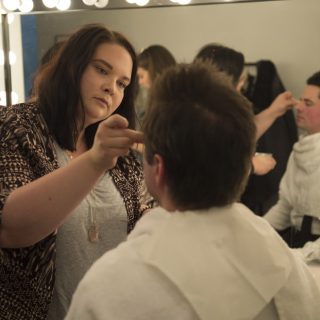 Prepping Kevin for his close-up | Image by Riun Garner

Bard’s Head of Wardrobe, Amy McDougall, had consulted with Costume Designer Christine Reimer to choose pieces that evoked Christine’s designs for the production; a black velvet cocktail dress for Amber, and a tailored black suit, skinny tie and period sunglasses for Kevin.

David worked with our actors, shooting from multiple angles in the convertible, and director Dean had a bit of fun himself. 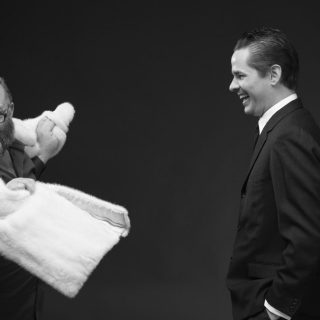 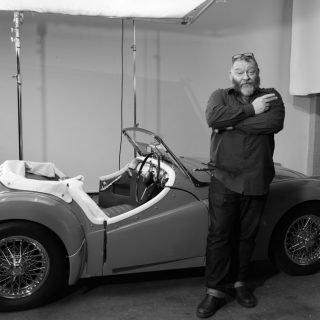 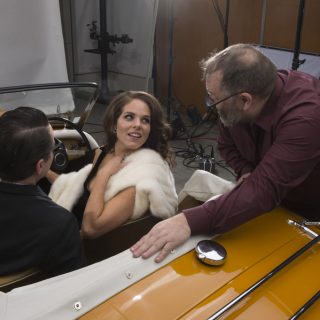 Kevin and Amber getting some direction from Dean 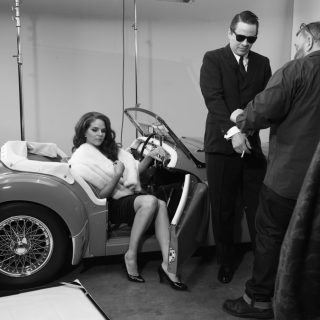 It’s all in the details 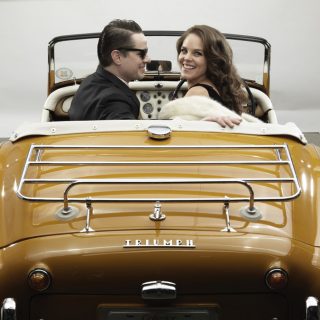 Kevin and Amber having fun in the Triumph TR3 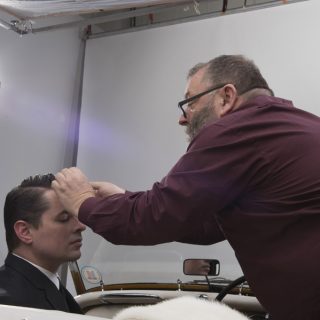 Making sure each hair is in place

Once the studio session was done, Dean worked with our team and Emily Cooper to select the main campaign photo. Then Emily worked her retouching and compositing magic to create the final image that you see in our season brochure and on our website. 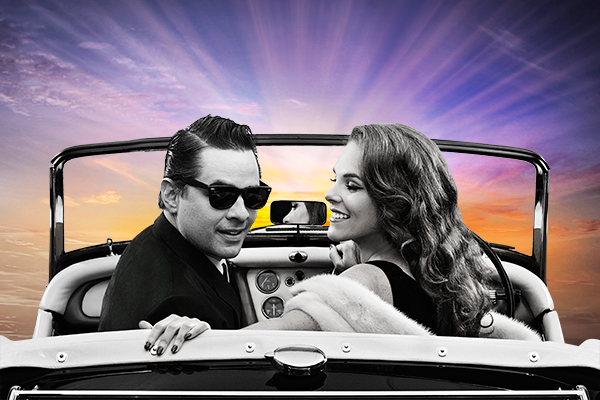 It was a fascinating day and we got great results. Thank you to everyone who helped make it happen!