Unfold Your Own Myth

This mural celebrates the thirtieth anniversary of Bard on the Beach. The central female figure is inspired by this year’s strong female leads and is surrounded by a supporting cast of local animals set within the natural splendour of Vanier Park. – Sandeep Johal

Sandeep Johal is a Canadian visual artist whose colourful geometric forms and intricate black and white line work is aesthetically and conceptually inspired by her South Asian heritage. Sandeep believes in the power of art to create awareness around issues related to cultural identity, gender equality, and human rights. Her art practice is an expression of her social and cultural concerns, particularly gender justice. Her most recent series, She Left Only To Come Back (2019) is an exploration of femininity, motherhood, inter-generational trauma and loss set against a backdrop of familial obligation and self-sacrifice. Sandeep has completed a number of public projects, most recently, murals for the Vancouver Art Gallery and Bard on the Beach. Her work has been featured in CBC Arts, Vancouver’s CTV Morning Live, The Vancouver Sun, The Georgia Straight, Gray Magazine and numerous other print and online publications. (sandeepjohal.com) 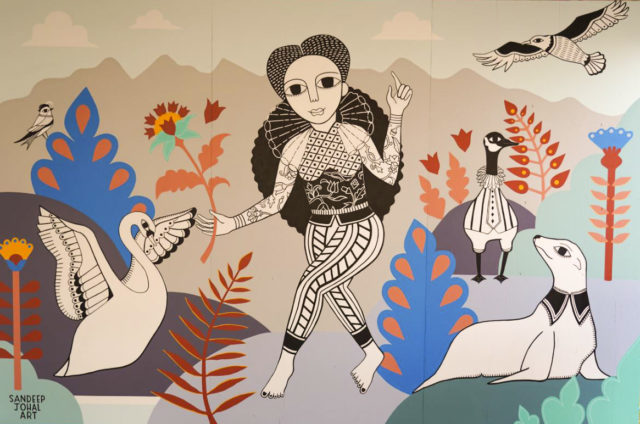 Unfold Your Own Myth, Sandeep Johal (2019) | Photo by Kristin Szilvassy